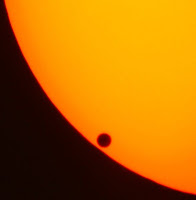 Almost all humans living today can never experience the 2117 transit. So, do not miss the rare chance.

The last transit was in 2004, but before that, it was in 1874 and 1882. Around that period, Japan experienced Meiji Restoration, and based on this, Japan developed to absolutely higher level than before. Hence, that was one of the greatest period in Japan.

I cannot imagine what will people in 2117 think of today, but I can say that the estimate depends on our daily doings.