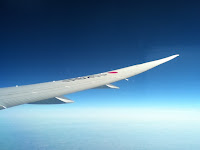 I am now in Boston, USA, to attend the IFAC TDS (Time Delay Systems) conference. From Tokyo to Boston, I flied with the Boeing 787 Dreamliner, which is a new airplane, entered commercial service on October 26, 2011.


The Boeing 787 Dreamliner is a long-range, mid-size wide-body, twin-engine jet airliner developed by Boeing Commercial Airplanes. It seats 210 to 290 passengers, depending on the variant. Boeing states that it is the company's most fuel-efficient airliner and the world's first major airliner to use composite materials for most of its construction. According to Boeing, the 787 consumes 20% less fuel than the similarly-sized 767. Its distinguishing features include a four-panel windshield, noise-reducing chevrons on its engine nacelles, and a smoother nose contour. The 787 shares a common type rating with the larger 777 twinjet, allowing qualified pilots to operate both models, due to related design features.

An amazing thing is the cabin windows.  For the windows, electrochromism-based "auto-dimming" (smart glass) is used instead of window shades, which reduces cabin glare while maintaining transparency. One can adjust the level of transparency with the key just below the window. I frequently changed the level before I got bored and fixed to the lowest level.


If you have a chance to come to Japan from Boston (or to Boston from Japan), you can get the experience!